a letter to World Museum Liverpool

I am writing to complain about the aquarium at World Museum Liverpool - specifically the conditions in which you keep the lobster and the sea bass. On the WML web pages, you proudly boast of a "fantastic new aquarium" where,


"you can see beautiful fish and other creatures from around the world in their underwater habitats...

"The more temperate water around the UK coast also hosts a surprising variety of fish and invertebrates. These are represented in coldwater tanks replicating the rocky coast of the Isle of Anglesey and the sandy shores of the Dee estuary...

"there is also a display about the deep-dwelling 'creatures of the abyss' that live at the bottom of the deepest oceans over 1000 metres (3300 feet) underwater, in conditions too extreme to replicate in an aquarium."

This gushing enthusiasm for the marine world actually hides some quite breath-taking cruelty to marine animals. The basic lie, repeated for emphasis in your advertising above, is that your aquarium has somehow "replicated" "underwater habitats". No aquarium can do this but the incredibly small tanks in which you keep your animals must stand as some kind of text book example of vicious exploitation. Two animals in particular can be singled out to illustrate this: the lobster and the sea bass.

Presumably, because restaurants keep lobster in small tanks you thought it would be acceptable to "replicate" the captive conditions of restaurant lobster. Your web pages exclaim:

"Expert staff are on hand to answer questions and run demonstrations in which visitors can learn more about underwater life or maybe even handle a living marine creature."

Perhaps if your staff were to explain to children that lobster can migrate hundreds of miles and that "Post-larval lobsters have a tremendous swimming ability and are able to move to different environments with speeds of 15cm/s for up to five days resulting in 65 km excursions" they would look at the lobster and at you in a different light.

The sea bass, as perhaps the biggest fish in the collection, is another example which highlights the cruelly small aquarium conditions managed by WML:

"Male bass first mature at 32-35 cm in length and females at around 42cm. At this time they begin an annual pattern of seasonal movements between summer feeding areas and winter pre- spawning areas. Tagging has shown that many of the bass found around Wales in summer, migrate seasonally to spawning areas off North Cornwall and in the Western English Channel. Others appear to remain nearer to their summer areas, where they may also be joined by fish that have spent their summers further north."

"Andrew Syvret was amazed when a fish that he had tagged in Jersey in september was caught by French sole netter close to the beach at Arcachon in the south of the Bay of Biscay, almost exactly two months later to the day. This fish must have travelled over 1,200km." 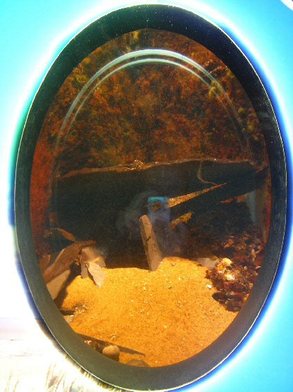 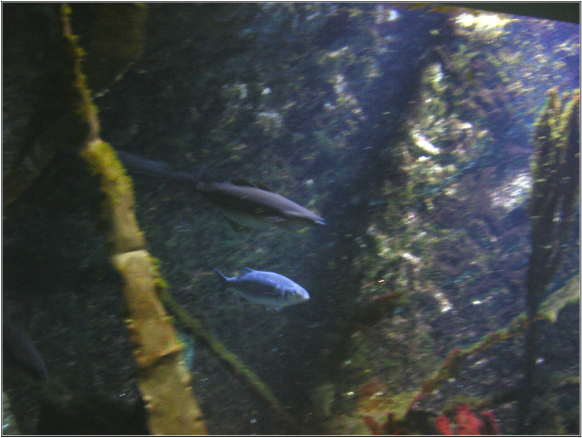 above: the lobster and sea bass tanks at LWM


These animals belong in an environment where, amongst other things, they can make massive movements and range great distances. At WML, however, the lobster stays immobile in its spotlit suitcase-sized world, while the bass make endless 2m circles in their 3m wide tank. It is an arrogant lie to say that these environments "replicate" an animal's habitat when anyone can see that at best they merely resemble 1, 2 or 3 cubic metres of that habitat.

I disagree with the government when it says in its Introductory Guide to the Keeping of Wild Animals, that there are "good commercial and recreational reasons for keeping wild animals in captivity". It is a miserable contradictory document which legitimises cruelty to animals. But in that contradiction, it requires keepers of wild animals to,

"provide a high standard of care, in order to protect the welfare of the animals [which should] not be subjected to unnecessary suffering."

and it seems to me that you fail to do this. In the fuller document, Standards of Modern Zoo Practice, section 14 covers 'Provision of Opportunity to Express Most Normal Behaviour' where it says:

"4.3 Accommodation should take account of the natural habitat of the species and seek to meet the physiological and psychological needs of the animal.

"4.4 Enclosures should be equipped in accordance with the needs of the animals [and] designed to aid and encourage normal behaviour patterns and minimise any abnormal behaviour." 

This is of course carefully worded rubbish which seems to concern itself with animal welfare while actually setting up the mechanisms by which to subvert it. Nevertheless, in sounding concerned, it demonstrates just how far WML aquarium is from meeting the needs of these animals. Similarly, the EU directive on the keeping of wild animals states that animals should be kept,

And again, the RSPCA, as part of its '5 Freedoms' campaign, has stated that a kept animal should be afforded conditions where it is able to express normal behaviour.

So how are the physiological needs and the conditions for the normal behaviour of the far-travelling bass and lobster met? They're not and the denial of these needs is cruel.

As with all aquaria, conditions at WML are inadequate and along with the other animals at WML (the invertebrates in the bug house are subjected to the same treatment) the bass and the lobster should be released now.

Of course, zoos and aquaria are popular. People like animals and those same people - people who visit museums and those who operate them - are prepared to be cruel to animals to show just how much they like them. Just as museums invest in capital building projects however, so do cultures invest in self-decieving, self-serving rationales which help, for example, to keep wild animals unnecessarily locked up.

I look forward to your response.

"Tagging experiments in coastal waters suggest that small lobsters undertake rather limited movement, although larger individuals may travel extensively. In contrast, offshore lobsters show well-defined shoalward migrations during the spring, traveling as much as 300 km (186 mi), regularly 80 km (50 mi). Lateral movements along the shelf edge have been demonstrated as well."

"Most inshore lobsters appear to be relatively local in their distribution moving less than 25 km (about 15 miles) seasonally (Lawton and Lavalli 1995). 'In the Gulf of Maine, lobsters engage in small scale movements from shallow water into deeper water, apparently in response to strong winds and turbulence rather than the seasonal thermal regime' (Lawton and Lavalli 1995). Adult inshore females seem to move to deeper water earlier in the fall than adult males.

"Probably 20% and possibly 30-40% of offshore lobsters annually migrate into shallow water in directed shoalward movements the spring and summer off southern New England - Lobsters from offshore portions of the Scotian shelf and eastern Gulf of Maine undertake seasonal movements to shoal areas on Georges and Browns banks (Fig. 9). These movements from deep to shallow water may act to maintain lobsters within a temperature range... allowing for more rapid growth than would be possible for lobsters either remaining inshore, where temperatures drop below 00C [320F] in winter, or remaining in deep offshore habitats, where temperatures rarely rise above 120C [540F] (Cooper and Uzmann 1971, Uzmann et al. 1977)."

"Post-larval lobsters, however, have a tremendous swimming ability and are able to move to different environments with speeds of 15cm/s for up to five days resulting in 65 km excursions (Cobb et al, 1983).

"Movements come in the form of migrations, homing, and nomadism.  Uzmann et al. 1977 estimates migratory speeds of these lobsters of 7.4-9.3 km/day.  While there is little doubt that the animals migrate great distances, the unknown parameter is what triggers the initial response."

"Over the past several decades, various researchers have marked adult and adolescent lobsters with individually coded visible tags, which are then picked up by fishermen. Scientists use the tag information to compare the sites of release to the subsequent capture site and estimate straight-line distance traveled.

"Most lobsters have been caught relatively close to the site of release. Others have roamed as far as the mouth of the Bay of Fundy to southern Maine - greater than 300 kilometers (km) or 180 miles - and from Long Island Sound, NY offshore to Veatch Canyon, greater than 200 km (120 miles)."

"Seeking warm waters to improve their growth rates (and the growth of their eggs), adult lobsters commonly summer in shallow, warm, nearshore waters, migrating to deeper waters in the fall and winter when the cool air reduces nearshore water temperatures. Although much about lobster migration is a mystery, the distances covered can be dramatic, with studies finding that some lobsters travel more than 180 miles!"