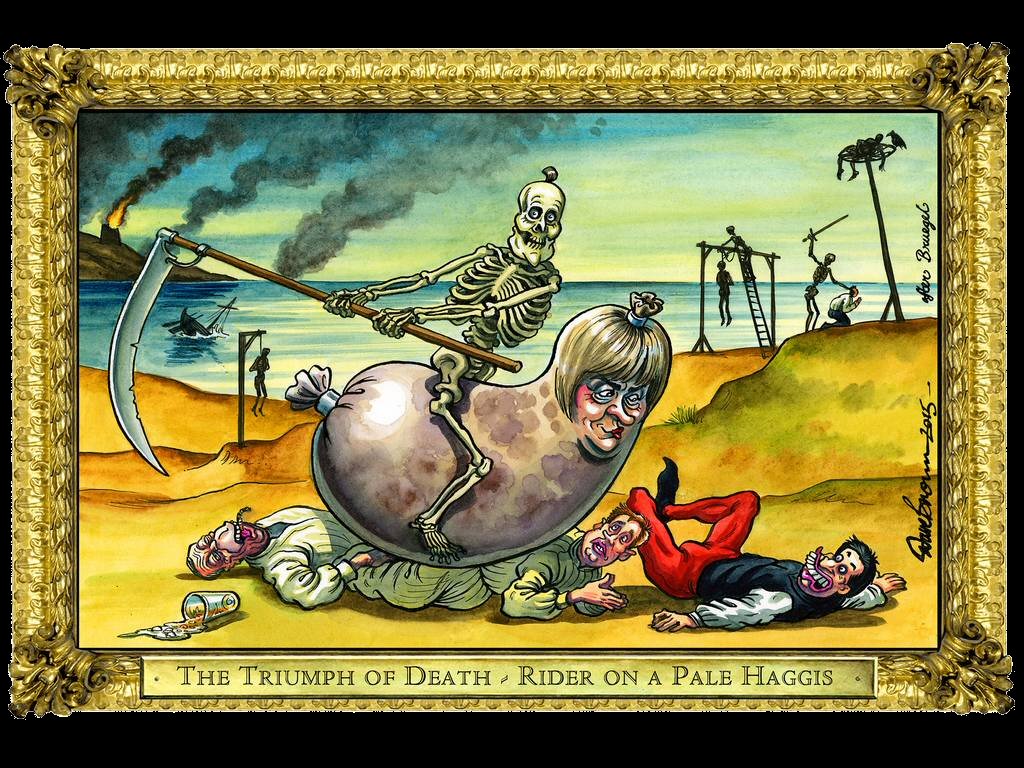 quite often check the cartoons at the bottom of the independent website and today saw your haggis / sturgeon effort. really, how obscure and navel gazingly irrelevant is that? it's complicated and well drawn and the signature is beautifully fluid and clean but it means nothing except to a few art history wags.

the nation has just voted for a massive bunch of assorted nationalists and this is really the best you can do, you who have a national platform to air your criticism? you're not angry enough. you're bloated and amused. it doesn't make for good work.

one of the best - in my opinion the best - cartoonist of the c20th was ron cobb who worked for peanuts. he got famous and wealthy and fat and stopped cartooning. it's salutary. all you salaried editorial cartoonists fall into the same trap of churning out bland commentaries on the westminster circus instead of looking wider afield into the activist world, foreign news sources and radical journalists to really editorialise with your work. you should be trying to send out a challenging and informative message, to popularly evangelise, not just high brow snigger for the few and the comfortable.

you will have no influence on the public if you do this, as i know myself, but at least you will have claim to some self respect. i'm disappointed dave. 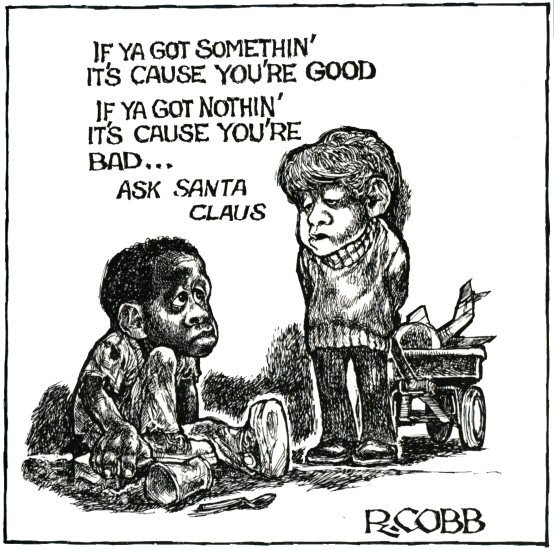 a second letter to dave brown 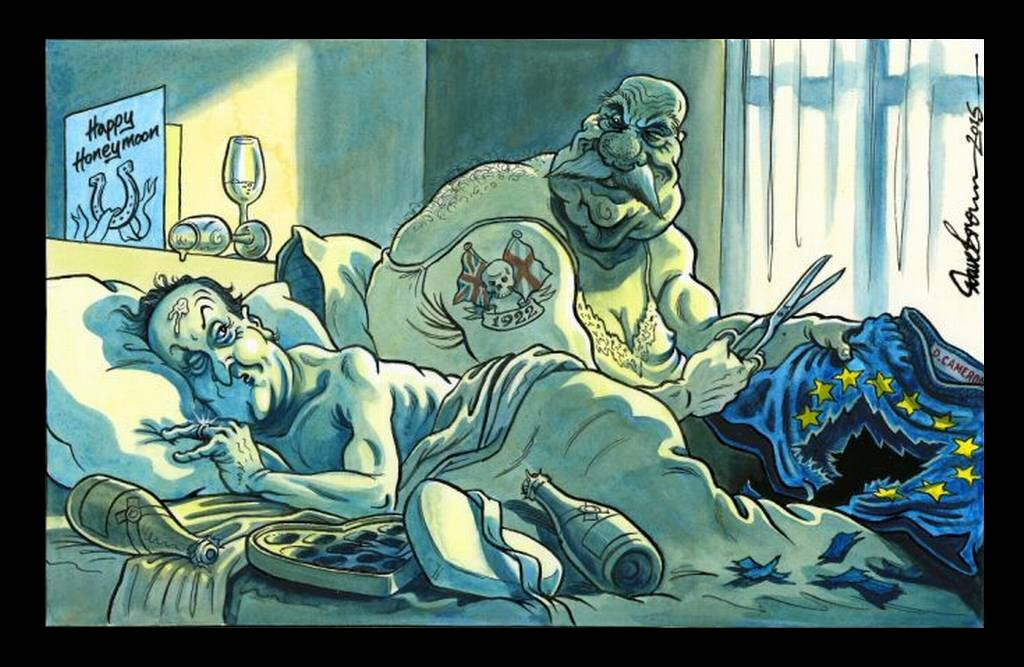 
i'm not really sure what to make of this follow-up cartoon but i know it's all bad. let me try a translation. the cartoon is complicated, and quite possibly nonsensical, but here we go.

there are 4 main elements: cameron as representative of himself and a new tory government, a meaty looking moustachioed rightwinger representing the tory backbench, a marriage bed and gay sex.

cameron has just woken up - one eye open, he looks over to see his new negligee-wearing 'wife' in bed next to him. the 'wife' is cutting a large hole in the front of his EU flag-emblazoned boxers.

the obvious message is that while cameron has won an election, it has come at the cost of being saddled with a more right wing agenda, particularly that there will be frostier relations with europe.

but the force of the message comes from the references to emasculation and an engendered conciousness of gay rape. the scissored crotch is the first sign of emasculation. then, cameron, a publicly self-proclaimed heterosexual (married, 4 kids - remember we are not assuming every apparently straight man is actually a closet gay), is portrayed as a post-copulation homosexual. we perceive a heterosexual man in an enforced (by the cartoonist) homosexual moment. because this is an act that cameron would in reality totally resist, brown has in fact created a fantasy about cameron's rape.

as much as the idea of gay sex may be approved by some straight people they do not by definition approve of it for themselves.

although brown portrays the gay element as consensual, for the actual cameron this would be anathema and it is in this twilight world of understanding, where the cartoon doesn't so much create a complete fantasy as re-imagine the actions of real people, that the problem lies.

it's commonplace for people to joke about male rape. comedians are forever going on about prison showers and recently russell howard went so far as to suggest that it would be a good thing for a well known convict to be raped in jail. he seemed to suggest it would be justice.

gay arguments that a straight person is just a gay person in waiting don't wash and are indeed just more rape fantasy. gay people are gay people because they say so and because they have gay relationships. while this rationale is good enough for them and for others, it is often not allowed to be applied to straight people in straight relationships who say they are straight.

all this is an attempt to show that we should take cameron's apparent non-gayness at face value and not wander off into the nouveau cliche that everyone's sexuality is, at base, flexible and all encompassing - ergo, gay or bisexual.

in reading the cartoon, the first thing we see is the impressive face of the moustachioed man. but this is incomprehensible on it's own so we look for recognisable elements. we see the face of cameron and then, as we begin to look around the wider context, we see him and the other male in a post-gay sex position. all of this happens in microseconds.

there is a moment at which we understand that cameron's graphic gayness is false because of what we know of the man but that understanding is immmediately conflated with the information generated thro our suspension of disbelief in looking at the cartoon - information which tells us that cameron is gay. brown has created a rape fantasy in which the straight cameron we all know has been forced by the cartoonist to have gay sex.

the difficulty in understanding this explanation comes from the fact that there are 2 cameron's - the cartoon cameron and the actual cameron who stands outside downing street giving press conferences and who is the (partial) source of his cartoon self.

it is ok in brown's eyes to suggest emasculation thro a comparison with homosexuality because there is an element of degradation in cameron's position, because, in the cartoon, he is a once-straight man who has whored himself by abandoning his sexual identity for career expediencies. at base, brown's cartoon is very much like someone calling a man a 'poof' even tho they know he's straight.

cameron's actual political situation is not about his sexuality. that that is the basis of the cartoon is completely artificial and done for amusement and impact. because calling straight people queer is funny. even in the enlightened world of AB demographics.

this has been quite a complicated argument but intelligent readers will see that under the mess of ideas there is a basically sound thesis, ie. that it takes a particularly vicious mind to create a subliminal rape scenario and that finding gay sex amusing at all is a peculiar cultural view. i blame brown for all this obscurity, a trademark feature of his work which avoids wider criticism no doubt because of his excellent penmanship and a general malaise when it comes to critically engaging with respected cartoonists.*